On a trip to China several years ago, I was told that the building crane was the new “national bird.” Today, with all the cranes dotting Phoenix’s central core, you might think there’s a new Phoenix bird.

Why so many cranes? Simply put, Phoenix is growing taller.

Amid the burst of residential high-rise construction, it’s interesting to note that this type of building is relatively new to Phoenix.

Plans for Phoenix’s first “skyscraper housing” were heralded by the contractor, Del E. Webb Construction Company, in October 1955. Six-plus decades is not that long ago, but enough to qualify the building as historic. 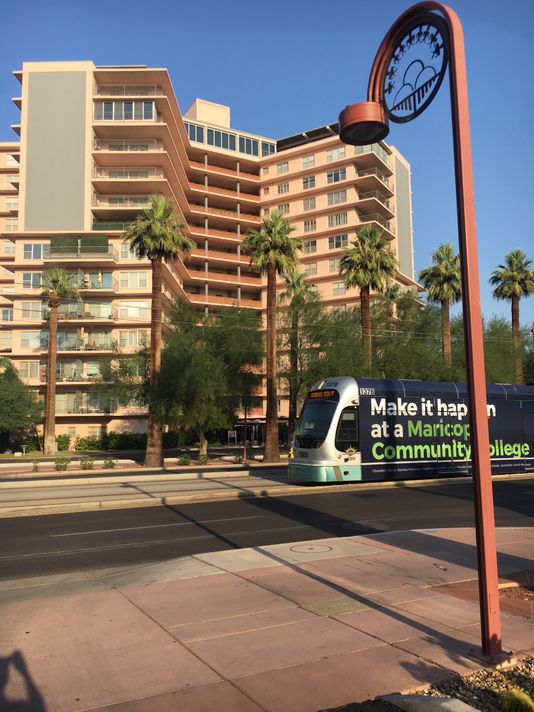 Granted, high-rise housing in Phoenix is on a much smaller scale than in major cities such as New York City, San Francisco or Chicago. Our first such building would be only 14 stories and contain 64 co-op apartments.

The site, the former estate of wealthy Arizona landowners Dwight and Maie Heard, was on the northeast corner of Central Avenue and Monte Vista Road. Funding came from three prominent men from Chicago and friends of Del Webb who often visited the Valley.

Ralph Applegate, one of the project sponsors, said that the site, “for so many years a showplace when the Heard family resided there, would again become the location of a magnificent structure in which Arizonans could take pride.”

The project, now known as the Phoenix Towers, opened in 1957 and is indeed a showplace — and not just because the exterior is pink.

With a modern design by Ralph C. Harris of Chicago, the building has an X-like shape. Certainly there was nothing else like it in Phoenix. Each unit had a large balcony, and the project had a swimming pool.

However, the Regency on Central Avenue and East Hoover was the “last” of the residential high-rises in the 1960s. Recessions, building busts, and possibly a lack of interest in this type of living created a lull in Phoenix residential high-rise construction for many years.

Applegate predicted that in the future, Central Avenue would have more such residential projects. And if the number of cranes visible today is any indication, he was absolutely correct.

Donna Reiner is the co-author of three books on Phoenix history.

Thank you for contacting us, we'll get back to you shortly.

Sorry, we are unable to send your message at the moment. Please try again later.